Celebrating 16 years since moving overseas and feeling a bit nostalgic…

I don’t think I’ve ever been so proud of producing a meal as I was the night I prepared our first “real” dinner in Zagreb.

We’d probably been there 2 or 3 days and I’d just begun to figure out not only where the grocery store was, but  also what was what inside the store. Ever mindful of the time in Slovakia we’d purchased a liter of apple cider vinegar thinking it was apple juice, I proceeded cautiously. 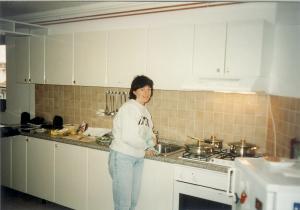 Kitchen in our Zagreb apartment – April 1996

Thankfully these were not grocery stores a la suburban America, but more like corner stores in New York City. With a fairly limited selection, I couldn’t go too wrong. The local products were the hardest to decipher – I spoke no Croatian of course – so I gravitated toward international brands that had ingredient lists in multiple languages. Pasta was no problem; penne is penne, and canned tomatoes, onions and olive oil were easy to figure out.  The dairy case was a different story: I’d never heard of kefir (but came to love it), couldn’t find any milk (it was all UHT milk, and thus not in the cold case), and had to guess what might be sour cream.

But, determined not to live on pasta forever, I went searching for inspiration in the aisles and found something I thought might be paprika, or cayenne, or some other red spice. I thought, heck, I’m in Eastern Europe – something like goulash should be possible! Sure enough, coupled with the excursion in the dairy section, I  managed to serve chicken paprikas on egg noodles that night. Victory was in hand!

It’s always seemed to me that the people who had the most trouble adjusting to expat life were those who didn’t know how to cook. Staple ingredients such as rice and pasta, as well as fresh fruit and vegetables, are available pretty much anywhere; Rice a Roni and cake mixes, not so much. If you know how to cook from scratch, you will not go hungry, even if you can’t pronouce the names of any of the products you’re buying!